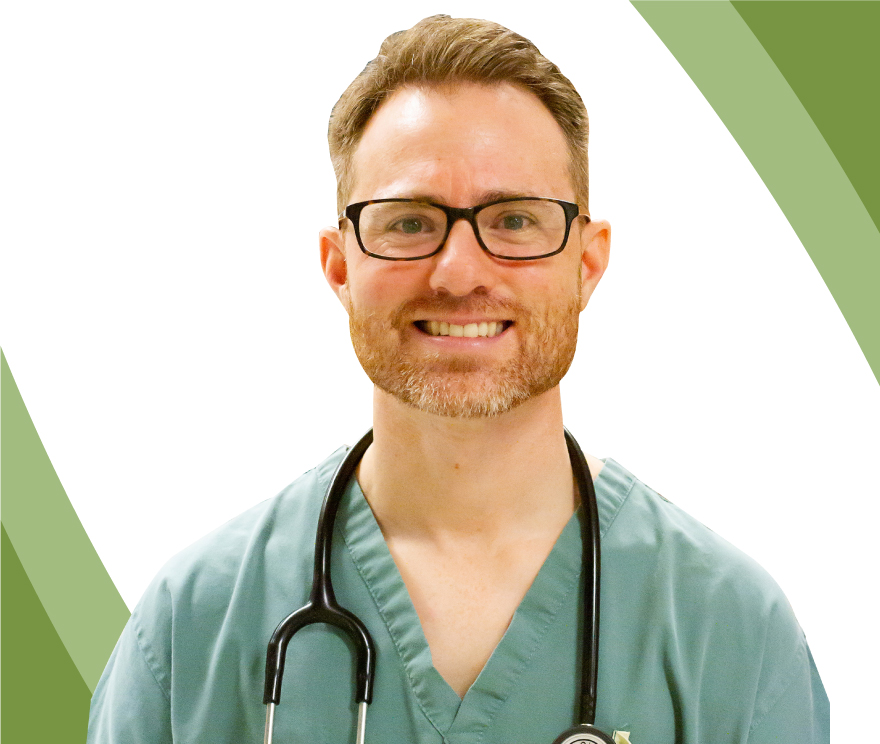 Emergency Department Physician Dr. Aaron Sibley’s expertise and training took him overseas and back again. His research has been featured on the Discovery Channel and he’s a leader with various national bodies. With many opportunities available to him, Dr. Sibley chooses Prince Edward Island as his home. And the reason? The people. 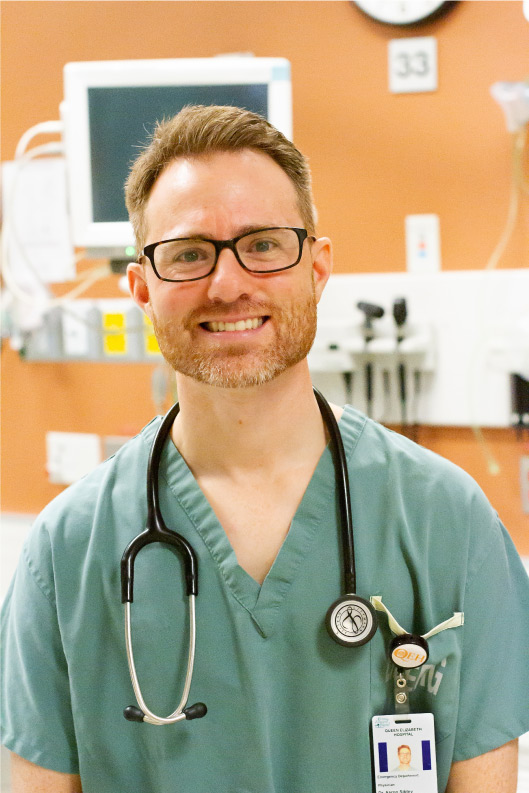 “It’s cliché but true. Working with this group of very competent and compassionate people is why I’ve stayed on PEI,” Dr. Sibley said. “They are all strong clinicians and experts in their specialities, but they’re also just very good people. It’s a team that’s truly striving to make things better for patients and the healthcare system as a whole. It’s a pleasure to be part of that.”

Aside from his work at the Queen Elizabeth Hospital, Dr. Sibley is the Associate Medical Director for the paramedicine programs at Holland College, and Research Director for both the division of paramedicine at the University of Prince Edward Island (UPEI) and the PEI Emergency Medicine Research Group. He’s also the Clinical Assistant Professor of Emergency Medicine at Dalhousie University, and Site Lead Investigator for the Canadian Resuscitation Outcomes Consortium.

Beyond being impressive titles on his resume, these positions carry a lot of weight in the field. Dr. Sibley’s work aims to improve survival rates for cardiac arrest patients, and he also trains future leaders in paramedicine – the frontline workers of traumatic events and emergencies that occur outside of hospital settings.

He’s seen as a mentor by many who encounter him, but he’s surprised to hear that. He believes his success is due to the support and encouragement he received – and is still receiving – throughout his career.

“I’ve been fortunate to have some fantastic people around me who supported me and saw potential in me. They invested time, provided guidance, encouragement, and support. So now, when I see challenges, I look for solutions. And, I feel a duty to help others.”

That sense of duty is what lead Dr. Sibley into the Canadian Army Reserves. He joined the service in 2007 and has been a Reserve Physician ever since. In 2017, he was deployed to Iraq for two months to work at a trauma surgical hospital for coalition forces.

“Someone has to help, even in terrible situations. It’s certainly hard, but since I have no control over what has already happened, I know I must control how I respond and act. It can be a life-or-death situation and I must make sure the patient is given the best clinical care I know how to give.” 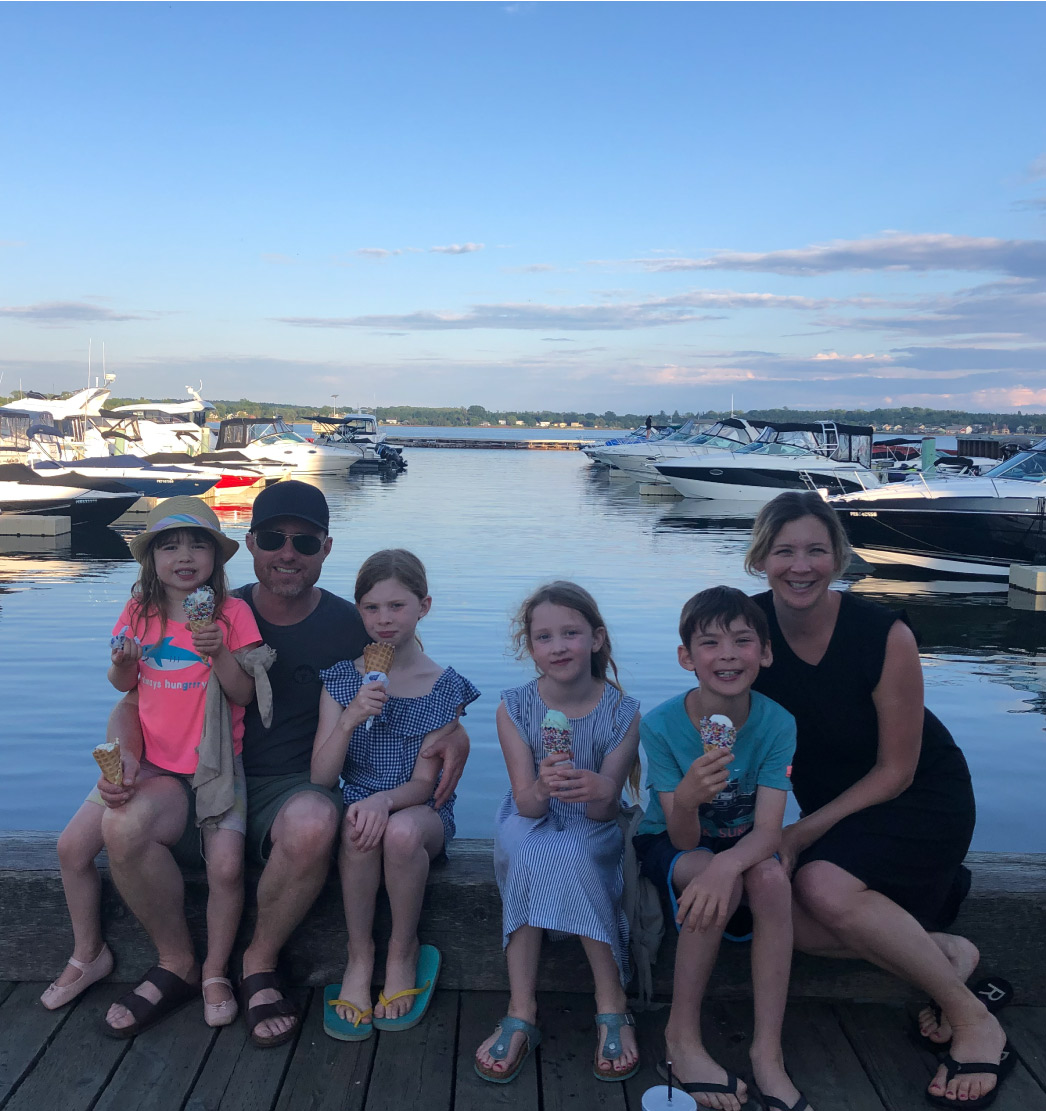 Dr. Sibley has found his niche in prehospital and disaster medicine with current research interests in paramedic interventions during critical care transport. He has a passion for helping paramedics obtain degree-based education through the UPEI's BSc in Paramedicine.

“Their work is critical to a patient’s ultimate outcome,” he said. “Their initial treatments can be lifesaving, so they need superior knowledge and I’ve really enjoyed promoting and developing that program, plus I get to work with one of my best friends, Dr. Trevor Jain.”

Dr. Jain, who also works as an emergency department physician on PEI, partnered with Dr. Sibley on a research study that looked at the use of unmanned vehicles in the triaging of trauma patients in mass casualty situations. Their worked garnered international attention and was featured on the Discovery Channel’s Daily Planet.

“This is research that may be particularly important when there’s no access to a scene, whether it be a plane crash in a forest or a biological threat,” Dr. Sibley said. “We developed techniques that can be used for Search and Rescue by RCMP and even enhance the work of paramedics.”

With such a fascinating career behind him, Dr. Sibley continues to choose Canada’s smallest province for this stage of his life. But the work-life balance and the family-friendly environment on the Island have allowed him to continue with his research, the work he loves, and still enjoy time with his beloved family.

“For a small place, PEI has a lot of the amenities that larger places have - good theatre, great restaurants, and lots to do with the whole family. And, of course, you can’t beat PEI summers.”

Dr. Aaron Sibley is one of approximately 300 physicians on the
Island and a member of the Medical Society of PEI.